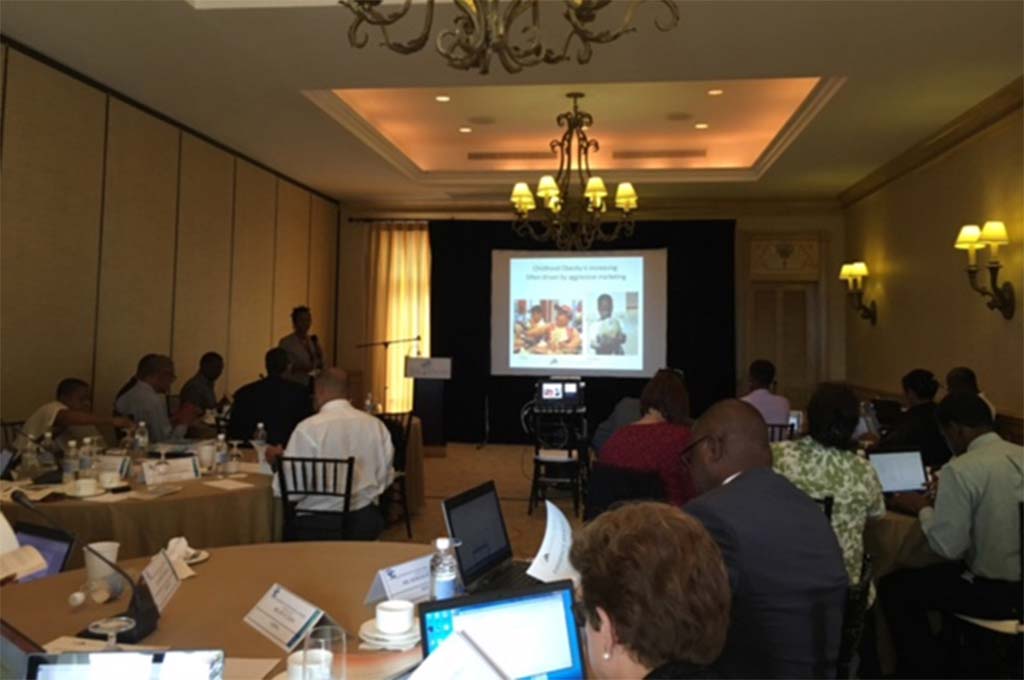 Chief Medical Officers (CMOs) must use their considerable expertise and influence to help drive the non-communicable disease agenda in the Caribbean, according to a top regional expert.

At a recent meeting of CARICOM CMOs in Turks and Caicos, Dr Alafia Samuels, Director of the Chronic Disease Research Centre (CDRC) and head of a wide-ranging evaluation of the 2007 Port of Spain Declaration on NCDs, presented key findings from the evaluation and explored the specific role CMOs can play in strengthening the NCD response. Some 15 Chief Medical Officers attended the briefing.

According to Dr Samuels, “We can’t stress enough the importance of CMOs in this process; providing solid medical grounding for interventions; making sure NCDs are central to the health agenda and guiding Health Ministers in prevention and control so we can really see results in the run up to the Port of Spain Declaration’s 10th anniversary.”

It was highlighted that many CMO interventions should support improving clinical quality of care. Suggestions made by Dr Samuels included: setting clinical priorities such as the detection and management of high blood pressure; supporting training workshops for country epidemiologists; helping to promote the introduction/enhancing of electronic medical records; reviewing and updating the national list of prescription drugs and using the drug purchasing machinery of the Pan American Health Organization to buy high-quality generic medicines.

Dr Samuels also stressed the need to reduce the onerous burden on countries to produce some 21 regional and international reports. She unveiled a streamlined Port of Spain evaluation grid to simplify reporting and avoid duplication of effort. The new grid will be introduced this year.

There was reference to mortality and census data being used to describe mortality by ethnicity in Cuba, Guyana, Suriname and Trinidad and Tobago, as has been done with Belize.  It is also being proposed that regional STEPS NCD risk data sets should be used to determine and monitor the social determinants of NCDs. To this end, a draft data-sharing MOU between the Caribbean Public Health Agency (CARPHA) and CDRC/University of the West Indies, to allow the analysis of such available information, was revealed.

During the discussion, CMOs voiced their support for the NCD Declaration evaluation and acceleration process, and pledged their support and collaboration. Dr. Samuels was congratulated for “saying things that government employees cannot say” in addressing some of the unethical practices of marketting to children in schools.

The CMOs at the meeting proposed asking CARICOM Member States to support the data sharing agreement; requested support for the new NCD grid among members; and advocated the prioritisation of hypertension management through rational drug policies and the establishment of sound risk factor policies in relation to alcohol, tobacco, trans fats and unhealthy foods. CMOs also committed to supporting national efforts to tax sugar-sweetened beverages.

In speaking to the medical professionals, Dr Samuels suggested that they support a raft of requests, or ‘asks’ to be put to CARICOM Ministers of Health, aimed at enhancing NCD governance and creating supportive environments through legislation, regulation and taxation.

The June 21 CMO meeting took place on the eve of the CARPHA Health Research Conference.