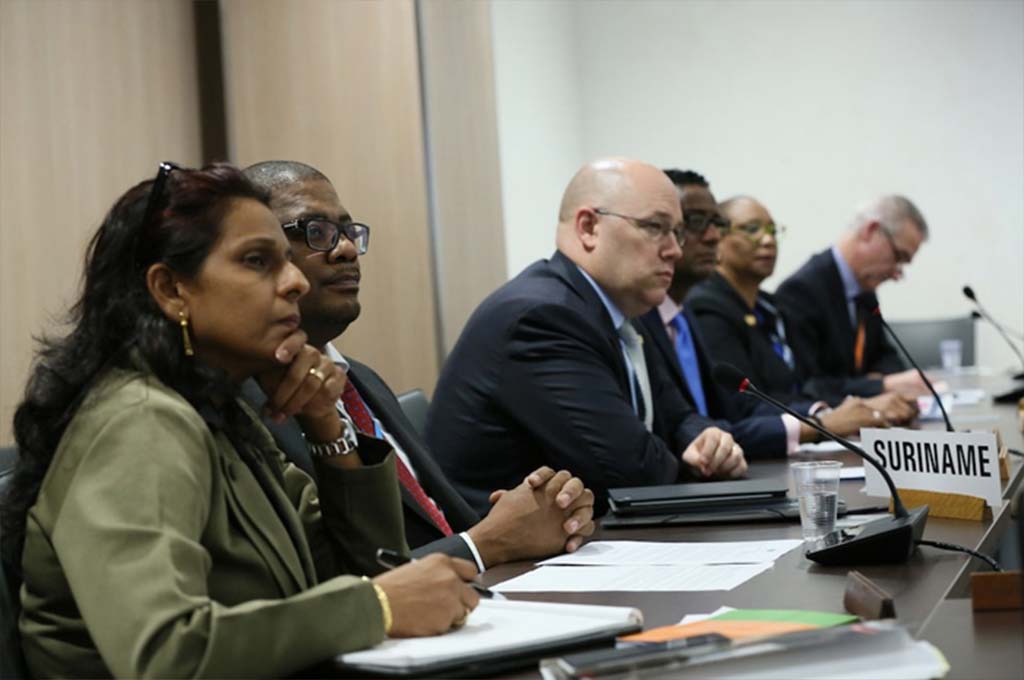 Geneva, Switzerland, May 25, 2016: The Caribbean’s Health Ministers are in a unique position to turn the tide against the region’s growing epidemic of non-communicable diseases (NCDs) and need to do much more, a CARICOM meeting at the 69th World Health Assembly heard on Tuesday evening.

Participants discussed next steps in confronting an epidemic of heart disease, strokes, diabetes and cancer which is the worst in the Americas.

The gravity of the issue was expressed by a number of Ministers, including the Hon. Joseph of Antigua and Barbuda who noted, “NCDs are the greatest challenge we have in the Caribbean.” Dr Etienne also commented, “We need a joint strategy to return NCDs to the political agenda of Heads of Government. It needs to be framed as a developmental and economic priority.”

One of the key areas of debate involved how to ensure that the landmark 2007 CARICOM Heads of Government Port of Spain Declaration on NCDs is really delivering and how it might be renewed and re-invigorated in the run-up to its 10th anniversary.

Results from a wide-ranging evaluation, led by the University of the West Indies on behalf of CARICOM and PAHO and funded by Canada’s International Development Research Centre, were presented by Dr Samuels, head of the evaluation project. These results included some alarming findings: 40% of NCD deaths occur in those under 70 and rates of diabetes in the region are more than double global rates. In some countries, more than 50% of adults have hypertension, many of whom, predominantly men, are undiagnosed or not taking treatment.

Successes and challenges in making the Declaration’s 27 commitments really count on the ground were also revealed. Those involving a clear plan of action and institutional support fared better than those that did not and progress has been very poor in commitments involving diet, schools and communications.

The expert evaluation highlighted areas in which Health Ministers could use their considerable power and influence to drive the NCD agenda forward and give it a higher political priority.

According to Dr Samuels, “A multisectoral response is very important with all-of-society and all-of-government playing key roles. Ministers of Health are in a good position to coordinate actions both within the health sector and to reach out to other sectors too.”

A range of concrete steps the Ministers could take to improve the NCD response in the region was explored. These included tackling childhood obesity by banning advertising and promotion of unhealthy foods, advocating for taxation of unhealthy food, ensuring there is a person responsible solely for NCDs within each Ministry of Health and social health insurance for universal access and coverage.

The Ministers acknowledged the weight of their responsibility and several noted that they were already taking steps to rise to the challenge of NCDs. Hon. Joseph said that the proportion of the budget spent on NCD prevention and wellness promotion had been increased and that more parks would be built to encourage physical activity, adding, “We will be passing tobacco legislation by the end of June, and we are working on the legislation to tax sugar and salt products combined with reducing the taxes on fruits and vegetables.”

Hon. Steele of Grenada also spoke of the need to look at changing laws to ban unhealthy foods. “We need legislation to ban the importation of trans fats. International food companies are shipping their unhealthy products containing trans fats to the Caribbean, so they have different products that they export to us, which they could not sell in their home countries.”

According to Suriname’s Hon. Pengel, the country is making progress by ensuring that by the end of the year graphic warnings on cigarette packets would be in Dutch as well as English.

For the 69th World Health Assembly, which is hosting some 3,500 delegates from 194 countries between 23-28 May, NCDs are also high on the overarching agenda. Decisions taken will include how risk factors can be reduced and tackling childhood obesity and tobacco control.

See more images from the WHA below.