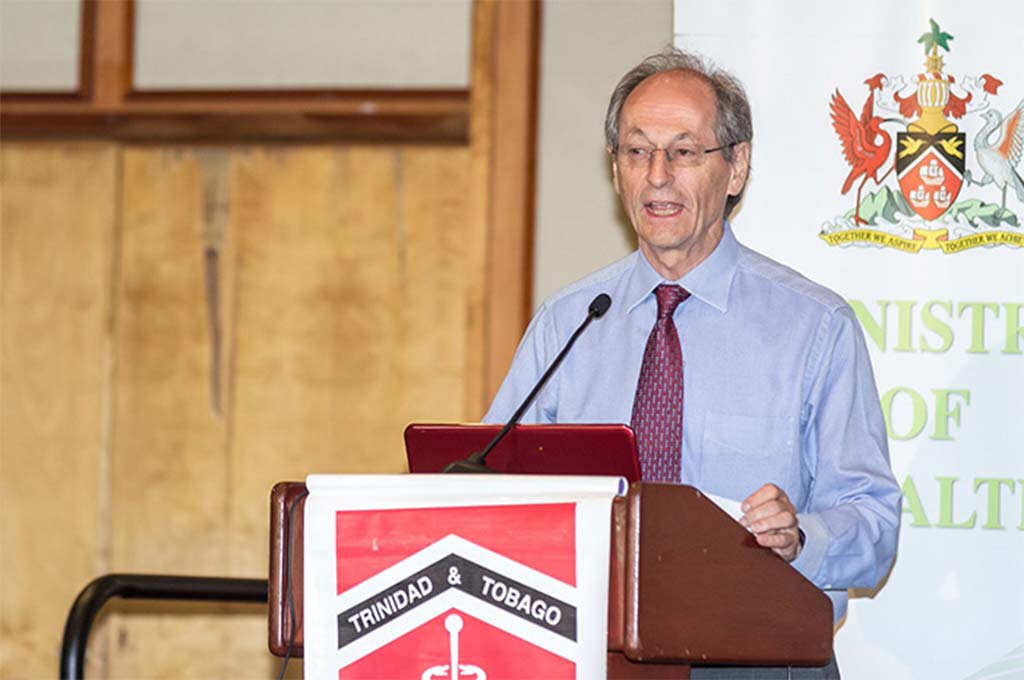 Most of the burden of ill health is socially determined and “social injustice is killing on a grand scale,” Professor Sir Michael Marmot, President of the World Medical Association told a rapt audience in Port of Spain this weekend.

Speaking at the Trinidad and Tobago Medical Association (T&TMA) annual conference, Sir Michael repeatedly stressed the importance of concentrating on the social determinants of health, those underlying causes of health outcomes such as access to money and resources and education levels: the conditions in which we are “born, grow, live and age”.  He noted, quite simply, that the richer you are the more likely you are to live a longer, healthier life. For example, in Baltimore in the United States there is an “enormous” 20 year difference in life expectancy between rich and poor. The poorer residents have a median income of US $17,000: the richest more than US $ 90, 000.

Sir Michael, Chair of the World Health Organization’s 2008 Commission on the Social Determinants of Health and author of the seminal book The Health Gap, argued that improving the health of individuals and populations is a “moral imperative”. He added, “I want to get governments on board by joining us in a moral endeavour” to achieve social justice and better health for all.

“This gentleman’s ailments have less to do with his cancer and more to do with every aspect of his life. That impacts on his ability to achieve and maintain health equity.” Dr Stacey Chamely

Echoing Sir Michael’s argument, T&TMA President Dr Stacey Chamely highlighted a vivid example of the social forces that can dictate health outcomes through the story of a fisherman living with colon cancer. Pressures of poverty, lack of real social support and inability to pay for needed medical supplies and interventions were, she said, having a real impact. “This gentleman’s ailments have less to do with his cancer and more to do with every aspect of his life. That impacts on his ability to achieve and maintain health equity.” She added that addressing the social determinants of health means intervening in people’s lives “before they arrive in hospital, before they collapse…. before they have to have surgery.”

Health in All Policies

The need to look at health holistically, the so called Health in All Policies approach, was reinforced by Dr Alafia Samuels, head of an evaluation of the 2007 CARICOM Heads of Government Declaration on Non-communicable diseases (NCDs). Explaining that individual behaviour change will not be enough to tackle the NCD epidemic, Dr Samuels maintained, “People have to do things for themselves, but if you’re pushing up a slope it matters how steep the slope is and society can do things to reduce the steepness of that slope – that’s what we mean when we talk about trying to help with the social determinants of health. The levels of intervention have to broad. “

“People have to do things for themselves, but if you’re pushing up a slope it matters how steep the slope is and society can do things to reduce the steepness of that slope…” Dr Alafia Samuels

Dr Samuels used the example of tackling childhood obesity with health in all policies and an all-of-government, all-of-society approach addressing marketing, an obesogenic environment and fiscal measures such as a tax on sugar-sweetened beverages.

Making sure that the NCD response is as broad and as deep as possible really matters in the Caribbean. Obesity rates among women in the region are among the highest in the world. Rates of diabetes are double global rates, and diabetes mortality in Trinidad is eight times higher than in North America. More than three quarters of premature deaths in the Caribbean are caused by NCDs.

The Pan American Health Organization’s Dr Edwin Bolastig agreed that NCDs were a key regional challenge, that PAHO backed a social determinants of health/Health in All Policies prism and was “strongly committed to putting equity firmly on the agenda.”

In a rousing speech Trinidad and Tobago’s Minister of Health, Hon. Terrence Deyalsingh made the point that although  next year is the 10th anniversary of the Port of Spain NCD declaration, little progress has been made and that, “We have had governments of inaction.” The Minister promised that this was all set to change in Trinidad and Tobago with the cabinet due to have its final deliberations on a new national NCD policy.

“We are going to have a government-led NCD policy…we are no longer going backwards but we have to go forwards and the year 2016 will go down in the history of Trinidad and Tobago and the Caribbean and the world where a government took a stance not against an external enemy but against a societal problem,” he said. The government would concentrate on improving the lives of all citizens, especially those in the lower socio-economic groups who do not have “the time, the inclination, the education or the information” to pursue health-seeking behaviour.

“..Inequities in health are not inevitable, we have the means to make a difference. The question is: are we going to do it?” Sir Michael Marmot

If addressing the social determinants of health to lengthen and improve everyone’s life seemed like a tall order, Sir Michael Marmot had a message for the audience in his closing remarks.

“The evidence shows that there’s a great deal that we can do. It is possible to make a huge difference really quickly…Inequities in health are not inevitable, we have the means to make a difference. The question is: are we going to do it? Why treat people and send them back to the conditions that made them sick?”

More images from the conference.

For the WHO Commission on Social Determinants of Health final report click here.

The opening sessions of the Trinidad and Tobago Medical Association annual conference were live streamed courtesy of the Port of Spain NCD evaluation committee: Caribbean Unity in Health.