Michelle O’Kieffe was diagnosed with an aggressive form of breast cancer at the age of 32. Having been in remission for many years, she is determined to improve support for women living with cancer in Trinidad and Tobago. Here is her story. 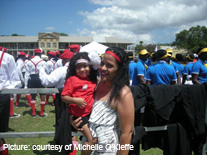 My name is Michelle O’Kieffe and I live in Trinidad. I was diagnosed with breast cancer in February 2000 at the age of 32.

I discovered a small lump just below my right breast. When I went to get it checked out the doctors were more panicked than I was. I didn’t have a clue that it could be cancer. There was no history of it in my family and I was young, 121 pounds, I didn’t smoke, I was vegetarian, really active.

“When I got my cancer diagnosis I took it in my stride. I saw it as another challenge, another hurdle to get over.”

But when I got the diagnosis, that the cancer had already spread, I took it in my stride. I saw it as another challenge, another hurdle to get over. If anything it was harder on my mum who was alive at the time. She took all the worry, all the emotion, asked all the questions that I didn’t want to ask.

It was hard on my husband and kids as well. I had two sons, Christopher aged 12 and Christian 6. I started preparing them for what might happen. I tried to speak to them as adults and let them feel whatever they were feeling, even when my older son reacted badly to the idea of me losing my really long hair (it was past my bottom!) He said he didn’t want to be seen with someone bald but I asked the hairdresser to chop off my hair anyway and the boys said I looked cute! So it was OK in the end.

My cancer was very aggressive and in the beginning it recurred twice. But I wasn’t giving up, that wasn’t even an option.

I’ve been in remission for quite a while and I’m looking to the future. I have a five year- old daughter, ChristyAnn, now. I was quite surprised when I went to the doctor in March 2010 feeling a little queasy, only to find out I was 6 months pregnant! Everyone loves her. She lights up everybody’s life.   And she has given several other women with cancer hope that there is something to look forward to.

I’m starting a ‘survivorship programme’. I’ve been a volunteer at the Trinidad and Tobago Cancer Society for a while, offering all kinds of support. Now there are around 70 of us who meet once a month and I want to expand it.

“If you survive, you’re happy to be here but the consequences of being diagnosed are extreme and they don’t seem to stop. You just have to try to be strong to deal with it all.”

It would be good to highlight other forms of cancer and for women to come to the forefront to talk about them. I also want to work with agencies to help make sure that women in public hospitals get access to the drugs and treatment they need.

One thing it’s important to mention is that cancer doesn’t only affect you physically, but emotionally, spiritually, financially…It’s a complete thing. Many women get depressed. If you survive, you’re happy to be here but the consequences of being diagnosed are extreme and they don’t seem to stop. They’ll be with us for the rest of our lives. You just have to try to be strong to deal with it all.