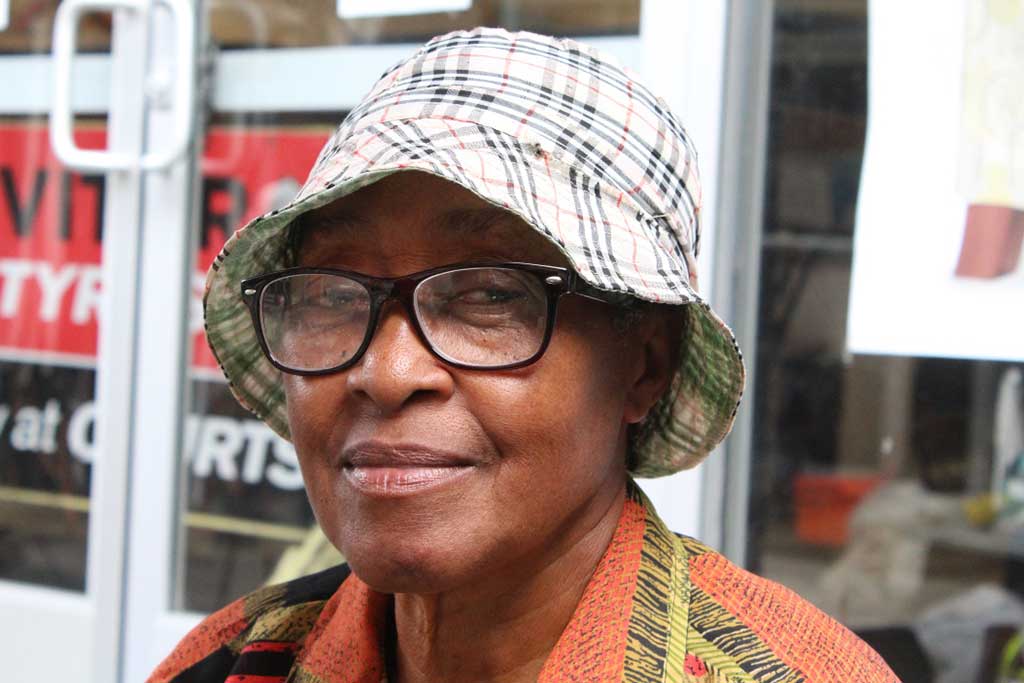 If you have traversed the bustling streets of Kingstown, chances are you may have spotted Dauphine Cato- a quiet, unassuming vegetable vendor who plies her trade along Middle Street.

At first glance, Dauphine seemed like just another vendor in the deluge of others hustling on any available corner or alley in the capital of St.Vincent and the Grenadines. But the FaN team was soon to discover the incredible work Dauphine was doing as the President of the Rural Women’s Producers- a regional organization initiated by the Rural Women’s Network which started in 2004 out of a network of single parents. The genesis of the organization came out of monthly meetings where the women went to brainstorm ideas on how to improve their socio-economic conditions. By word-of-mouth, they learned of IICA- the Inter-American Institute for Cooperation on Agriculture and they decided to launch the group officially.

The FaN team arranged to meet with Dauphine on a Friday, one of the busiest market days in SVG. We fought the thick crowd, bobbed and weaved through the butt and bounds alleys of the cramped capital and eventually found Madame President on Middle Street. It was difficult to believe that this small-statured, soft-spoken woman was the one moving mountains to keep the agricultural sector alive in SVG, with an army of thirty women supporting her. We found Dauphine seated on a wooden stool when we arrived, wearing an oversized, earth-toned shirt paired with a full length flowing skirt. On her head she wore a cloth cloche that shielded her eyes from the unrelenting overhead sun.

On her tray were an assortment of greens vegetables- callaloo, bok choy all neatly arranged, as well as crates of eggs stacked high. She appeared exceptionally ordinary but there was something concealed beneath her reserved nature that gave us a small hint: we were in for an eye-opening  interview.

Unlike the FaN team who were pouring sweat from our foreheads and armpits, Dauphine was calm and cool under the scorching midday sun. While we readied the equipment, she chatted in low tones with the neighbouring vendors about why we were there; glancing in our direction ever so often to see if we were ready to begin. It was evident Dauphine was eager to break open the vault of stories stored under her worn, cloth hat to us.

When the camera began rolling, Dauphine required only mild prompting to get started. She told us firstly of her dream: to see Vincentian girls, women and mothers empower themselves through agriculture. In Dauphine’s ideal world, all women in SVG would be involved in agriculture, whether on a small scale such as a backyard gardening or on a larger scale like a multiple-acre farm. All women would be active members of the Rural Women’s Producers and be able to earn an income from the land and they would have access to the tools and materials needed to improve the production process. Her dreams also stretch beyond the bounds of the Rural Women’s Producers: she hopes that in the near future the agricultural output of SVG will return to its glory days with women leading the way, of course.

A study conducted by the Food and Agriculture Organization (FAO) shows from 2008, SVG registered a consecutive economic downturn with agricultural contribution to the Gross Domestic Product (GDP) dropping to extreme lows. Over the years, the agricultural contribution has continued to decline and stood at a mere 6.2 percent of GDP in 2013, compared to almost 13 percent in the previous decade.

A failing agricultural sector has forced the government to source food from beyond the shores of the island- this, Dauphine says, is not only an expensive option, it has also been detrimental to the health of Vincentians.

“The way that overseas food is being grown; we here do more natural farming and everything over there is chemicals. Here we would plant and be ready to reap in about eight months but over there they would plant and in the space of four weeks, for example, for chickens, they would be ready to sell but I have to wait eight months before I sell a chicken.”

Dauphine says the current membership, though small, has already made significant steps in rebuilding the sector through food, poultry production and manufacturing. The thirty members are gathered from across seven communities on the island, all specializing in different forms of farming and food production.

“Each person has her own authority to do what she feels is best to do. Some would do jams and jellies, some would do pepper sauce, seasoning, seedlings, root crops and vegetables.”

She says the decision about what to produce is based on the climatic conditions of the areas where the members live, what crops are in season as well as how much land may be available to each member.  Dauphine acknowledges that although the group of women have been doing stellar work over the years since the organization has started, they need more members to accomplish the dream and further to that, they desperately need financial assistance.

In 2008, they approached the Ministry of Agriculture for funding assistance but none was forthcoming. In 2010, they were able to secure funding from the Global Environmental Fund (GEF) through the Canadian government. The grant was for the purpose of chicken farming and ten persons were given materials and funds to establish chicken pens. Since then, funding opportunities have been few.

Dauphine explains the funding is desperately needed to help the group deal with a vexing issue familiar to many farmers in SVG- praedial larceny. She explains while the members have been working diligently to produce and sell their goods with the limited resources available to them, crop thieves have been hard at work and the women are being left with nothing to sell. In addition, animals such as sheep and even goats would sometimes venture onto the farms to eat the produce or stray dogs would attack the chickens farms.

Dauphine says the organization needs funding to construct fencing around the lands they occupy to stamp out the incidents of praedial larceny.

It was during this part of the interview about the challenges faced by the Rural Women’s Network that our camera equipment encountered challenges of its own. The FaN team was forced to break the interview to fix the technological hiccups. We apologized profusely; all the while Dauphine remained patient and her enthusiasm never faltered. This patience, she explained was a trait she gained over the years of making a career in the rich soil of the island.

The stories about her early days as a farmer spilled out of her. On the very day she completed her secondary studies at age 16 , Dauphine was gifted a plot of land. At that time, banana was king in SVG and so Dauphine made this her crop of choice. It was back-breaking work for the teen who often had to transport her produce on foot as she had no access to a motor vehicle. However, Dauphine says the financial compensation was well worth the labour and time she invested.

More than 40 years later, her crops have changed but her enthusiasm for farming remains. It is her love for the soil and deep desire to see women such as herself be financially independent that blossomed into the Rural Women’s Producers.

Although the future of the agricultural sector is being questioned by some Vincentians, Dauphine says she believes the dream is an attainable one and depends on the younger female generation to bring it to a reality. Her plan is to continue to work diligently to help women of SVG attain these goals.